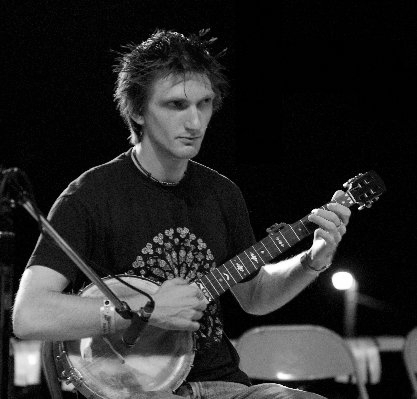 cy Marxer (guitar, mandolin, uke), and Jarred Nutter (fiddle). The selections found on this CD represent a surprising diversity of traditional Appalachian music, running the gamut from Round Peak stalwarts to stringband rags, from a Bill Monroe original to three Ed Haley tunes recorded on clawhammer banjo for the first time.

Following up on the success of "Insight," Adam spent a year refining and recording new material for his latest CD, "Perspective," which was released in the summer of 2009. The focus is once again on Adam's highly individual clawhammer banjo arrangements of traditional music, with able support from fiddler Stephanie Coleman and guitarists Beth Williams Hartness, Andy Edmonds, and IBMA Guitarist of the Year Kenny Smith. Adam's varied influences and sources are well represented on a collection of tunes from southern Appalachia and beyond, including selections from the repertoires of Marcus Martin, Ed Haley, and Bill Monroe.

In 2010, Adam collaborated with luthier David Hyatt and musician and recording engineer Paul Roberts to create "Earth Tones", a solo CD of compelling music played exclusively on the gourd banjo. This project has received critical acclaim from the banjo community as something altogether new and different, both among Adam's own recorded work and among the greater catalogue of old-time banjo recordings.

Most recently, Adam joined forces with his regular music partner Beth Williams Hartness on "Fine Times at Our House," a CD of old-time duets featuring Adam's clawhammer banjo and fiddle along with Beth's signature fingerstyle guitar. Their aim was to capture some of their favorite music as they play it at home for their own enjoyment; the result is a project that is at once intimate and enveloping. (Photo by Tim Brown ©2007)